Bitmovin’s Video Developer Report is out today and one interesting finding I noticed is that 26% of the 424 respondents say they’re using WebRTC to achieve low latency streaming.

Understanding that WebRTC was intended for synchronous 1-to-1 or 1-to-few communication, I am quite curious about its viability for a 1-to-many video streaming use case at scale, both in terms of the necessary infrastructure and also the operational cost.

What does everyone think? I am particularly interested in real-world applications to date.

Together with GlobalConnect Carrier we have validated the scalability of a one-to-many distribution based on WebRTC and the new IETF drafts for ingest and egress.

The report can be found here:
https://www.globalconnectcarrier.com/blog/validating-the-scalability-of-a-one-to-many-distribution-based-on-webrtc-and-the-ietf-drafts-whip-and-whep

Just curious whether you have done any tests or have expectations on what a deployment would look like that would scale to say a million users across six or seven countries? And how the impact of network latencies between countries and IPSs might influence latency and/or efficiency?

Hi @peder.borg,
We have not yet done any large scale tests with millions of users. However, using SFU topology in a CDN we believe that this should be possible if needed. In the POC we showed that each SFU hop would add around 10 milliseconds.

I can also add that Cloudflare are implementing webRTC with WHIP and WHEP: 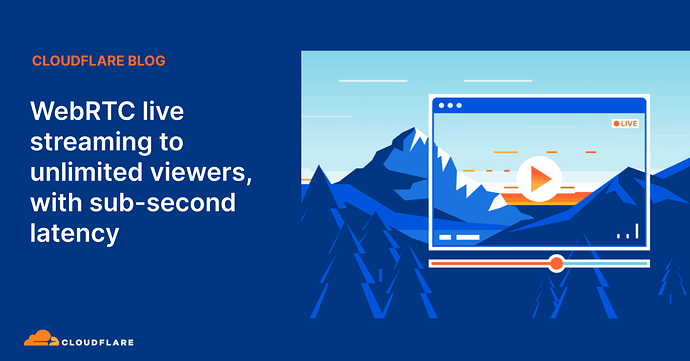 Very interesting to learn more about WHIP/WHEP and hybrid WebRTC-DASH streaming for interoperability and fallback. Thank you, Magnus!

I’ll be following Cloudflare Stream and other applications of this technology for real-world scale cases.

Copyright © 2022 Bitmovin Inc. All rights reserved.
Made with ❤ by developers for developers.